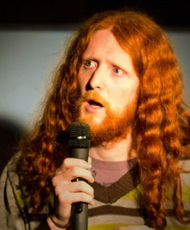 Alasdair won New Act of the Year (formerly Hackney Empire) in 2014 and has featured on BBC radio as a comedian and sketch writer. He’s performed stand-up across the UK, in the Glastonbury Cabaret Tent and at the Edinburgh Fringe. He knows quite a lot about 19th century magicians. Tourists often ask to have their photo taken with him, presumably impressed by this.