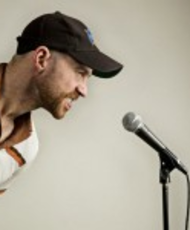 Aussie boy Damian Clark burst onto the UK comedy circuit in 2012 where his high-octane observational stand up has certainly caused some waves. Clark’s infectious energy and childlike outlook has had audiences in hysterics from the get-go and was snapped up immediately to appear on BBC3 & Comedy Central.

Before touching down in the UK, Damian made Ireland his home and became regular features in RTE’s IFTA Award-winning REPUBLIC OF TELLY, comedy panelist in TV3’s THE APPRENTICE: YOU’RE FIRED! plus wrote & co-starred in I DARE YA! (‘Critics’ Choice’ – The Irish Times, ‘A Smash Hit’ – The Sunday Mirror) which became the highest rating Irish comedy debut to date.

Damo’s rambunctious and uplifting stand up continues to tour clubs & festivals all over the UK, Ireland, Europe and beyond. Now is the time to catch this raw talent as he stands on the cusp of super stardom.