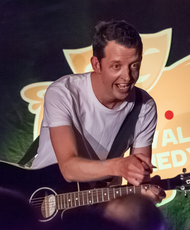 After completing an eight-year comedy apprenticeship as barman at The Chuckle Club, Jonny Awsum exploded onto the professional comedy scene with a crowd-pleasing set that’s seen him perform hundreds of gigs all around the world.

With his likeable style and trusty guitar, Jonny’s musings include everything from the white lies he tells his girlfriend to his new home town of Croydon and the memory of his first love at eight years old.

Jonny’s feel-good set captivates audiences at every kind of venue from pub back rooms to 700 seat theatres to a sell-out run at the Edinburgh Fringe with his hit show ‘Jonny Awsum’s To Do List’.

Jonny has played all the UK’s top comedy venues including The Glee Club, Jongleurs and The Comedy Store and has performed internationally everywhere from Cyprus to Slovakia.

In 2017, Jonny was broadcast to huge acclaim on the nation’s biggest-rating ITV show, Britain’s Got Talent. Performing alongside Ant & Dec, Jonny won a standing ovation from the theatre audience, a unanimous vote of approval from the judges and was seen by 11 million TV viewers. Jonny was broadcast numerous times throughout the series and made it all the way to the Live Semi-Finals. His performances on the show have been viewed more than 30 million times on YouTube.