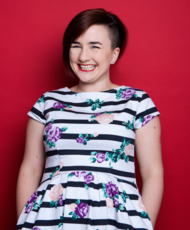 Laura Lexx is an award-winning comedian and writer.

Following a critically-acclaimed run of her show Trying, Laura won Best Performer in the Comedian’s Choice Awards and was in the top 10 of Dave’s Funniest Joke of the Fringe at the 2018 Edinburgh Fringe.

Laura won Best MC in the 2017 Comic’s Comic Awards and was nominated as Best Compere in the 2016, 2017 & 2018 Chortle Comedy Awards. She also reached the finals of the Amused Moose Comedy Award in 2016 & 2018. Laura has gigged at comedy clubs and festivals all over the UK and in Europe as well as providing tour support for Jason Manford, Tim Vine and Russell Kane.

“Laura Lexx oozes charm and charisma from every orifice… one of the best comedians on the circuit… She can command an audience with the simplest of eyebrow raises… a master of tangents and callbacks.”
Funny Women